We just returned home from a jam-packed three day weekend of raptors at Cumberland Gap National Historical Park, and what a time we had! Raptor Rehabilitation of Kentucky took 8 different species of raptors for the event, setting up a booth, and making presentations twice a day for three days. I'm bushed, but it was a really terrific experience. 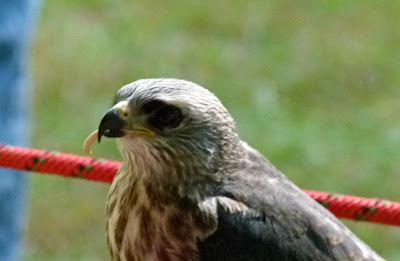 This is our newest education bird, a juvenile Mississippi Kite named Miki. He's never gone to any presentations before, and behaved like a pro at this marathon. Since he's an insect eater, he turns up his beak if offered mice, so we feed him mealy worms from our hands, and he eats them like popcorn. 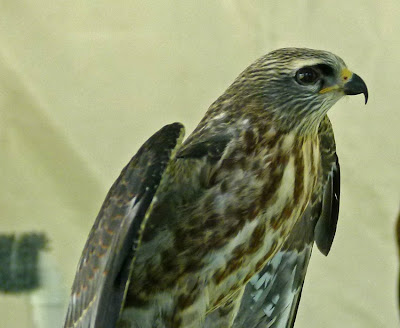 When his adult feathers come in, he'll be just spectacular with black wings and tail, light gray breast and head, and red eyes when he's sexually mature. He's a human imprint, and can't be released although there's nothing physically wrong with him. He shivered in the chilly mornings, and spread his wings like a real sun-worshiper when the sun finally burned through the early morning mountain fog. On Sunday, the final day, the temperature never exceeded 55 degrees, with overcast and drizzle, so all of us, both feathered and non-feathered, were shivering. 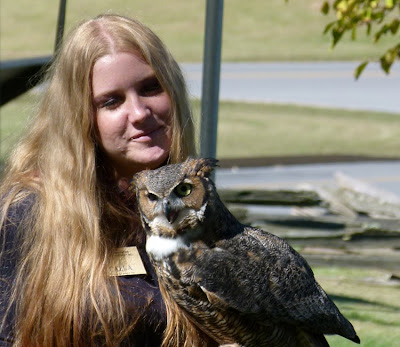 On Friday morning, we drove over early to get the perches set up before the scheduled events started at 9 am. Guess we didn't work fast enough though, when hordes of school children appeared like magic. The park rangers said they were expecting about 900 children that day. You could have fooled me though, since it felt, and sounded, like about 9,000, especially when they all started blowing the little bird-shaped whistles the park service was giving away! As the weekend progressed, I found myself referring to the birds by both their proper names and the old fashioned names. "These are American Kestrels, the smallest falcon in North America. My grandma called them Sparrow Hawks." At the reference to Sparrow Hawks, their faces lit up - at last I said something they recognized! 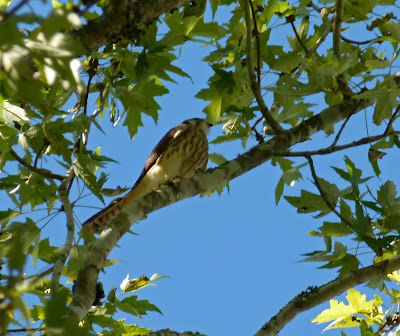 We took two Great Horned Owls and six young Kestrels to be released into the wild from rehabilitation. The Kestrels often circle around for a while after release, but these just left the area as quickly as possible. All except this this one. He landed in a tree right above our booth and shouted at us for about 20 minutes from overhead. Guess he just wanted to get his two cents in before moving on! I have a new Panasonic camera now, with a 24x zoom lens, the equivalent of a 600 mm lens. It also takes HD movies, and I captured this releasee in a good movie, and then somehow deleted it before getting it to my laptop. Oh well, that'll teach me, won't it! 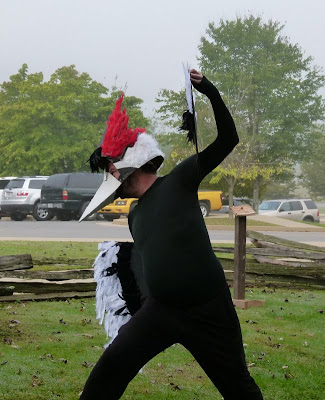 You probably haven't heard this in the news yet, but we also had sightings of the rare Giant Ivory Billed Woodpecker throughout the weekend at Cumberland Gap. Well, that's all I could decide it must be...
Posted by denapple at 8:40 PM

Looks like a splendid time was had. I saw on FB that Vickie Henderson was there as well. We have been out west for 12 days. Love your images, close-up and personal~

What a small world. I met Dennis at my art exhibit table, heard about your blog, discovered you had both been at the New River Gorge Festival in 2008 (the year before I attended)and that we knew a lot of the same people.

But it wasn't until now, my second visit to your blog, that I realized you were the lady who showed me Miki! What a perfect name for this a beautiful heart-capturing juvenile. Every time I look at the images, which I will post soon, I think about you saying, I think she likes to feel the wind in her wings. Such a lovely thought.

We were interviewed while at Cumberland Gap, and the videos have now been posted on YouTube and our Facebook page - http://www.facebook.com/pages/Raptor-Rehabilitation-of-Kentucky-Inc/112822125400169.